Woman donates her hair after 32 years 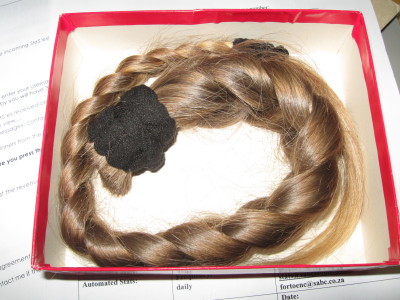 I Tania Dryden would like to donate my hair (plait) to CANSA. I had my hair cut on 30 December 2008 for the first time in 32 years. My last short hair cut was when I was six years old and thereafter I only had long hair. I have always said the day when I cut my I will donate my hair to CANSA.

My father passed away eight years ago due to colon cancer and many family and clients have passed away due to some sort of cancer. Therefore I felt it is the fight thing to do rather than keeping my hair plait for myself.

It is only a pleasure to hand my hair over for such a good cause that is why it was a great feeling the day I had my hair cut. It is a feeling I can’t explain to anyone but it felt good. I am so glad there is such a society for us to donate to such a good cause and help the one in need. You as an individual never know when something like cancer can take your life.

She took part in the CANSA Shavathon at Canal Walk, Cape Town on Saturday 7 March 2009.