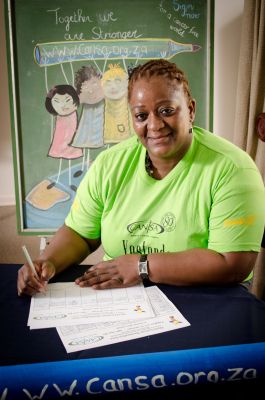 Aviation, had been in and out of hospital with constant abdominal pains accompanied by chronic diarrhoea. Doctors were baffled by the cause of her illness. Photo right: Millicent signs the World Cancer Declaration.

Out of desperation she went for a second opinion in September 2004. She was immediately sent to the Intensive Care Unit for three days. It was only then that her colon cancer was detected.The news was shattering and so began Millicent’s journey of despair.

“I was really shocked, very afraid, my world had caved in,” recalls Millicent.I said to the doctor that it couldn’t be cancer. I took care of myself, I didn’t smoke, I didn’t drink, we had no family history of cancer and I was young. There were lots of things I was doing right. It just couldn’t be!

Doctors recommended that she undergo emergency surgery to remove a fist-sized tumor, which had attached itself to her pancreas.“Two days later I went for an hour-long operation in my ascending colon. What followed was a year of chemotherapy. Nothing could have ever prepared me for the agony of chemotherap – the depression, loss of appetite, the headaches and the constant nausea.”

Millicent’s woes didn’t end there. In October 2005, she was told by doctors that she was not responding positively to the chemotherapy and medically speaking, she only had four months to live.“I felt the world crumbling around me. I thought about death. I was very scared that I would die and leave behind my child who was only six at the time. I resigned myself to dying, but not without a fight. There was this thing inside me telling me that it was not yet time!”

Millicent then sought to learn more about her condition. She consulted other doctors, searched the Internet about fatality statistics and read cancer survivor stories.“I went to the Cancer Association of South Africa (CANSA) for advice and support, where I met others living with cancer and survivors. I empowered myself. My faith strengthened.”

As it turned out, three years later, against all odds, Millicent was blessed with a second, healthy child, who doctors had predicted would be deformed.Today Millicent is healthy, enjoying life and her work. She has not been on chemotherapy ever since, but goes for six-monthly checkups. She says although cancer diagnosis can have a profound impact on one’s life and those around you, it should not be regarded as a death warrant.

“There are ways to beat the condition, but one needs to remain optimistic, resilient and NEVER GIVE UP HOPE, because only hope will see you through.”

Still fighting – this time for a cancer-free world

Millicent joined in CANSA’s celebration of World Cancer Day on the 4th of February 2011 and signed the World Cancer Declaration which will help lobby for a cancer-free world. She was interviewed along with Sue Janse van Rensburg, CANSA’s CEO, on Kaya FM and on Etv’s Sunrise Show as well.