Hair in the Air

I spent Saturday 5 October 2019 at Wonderboom National Airport with the wonderful ‘Little Annie’ Antonov family where they flew disadvantaged children as well as some children who had cancer. The day was supported by the management at Wonderboom as well as the Tshwane MMC for transport and several media organisations.

Thank you to those precious people who care about the promotion of flight and always deliver the most interesting flying promotions. We all need to support this wonderful aviation charity organisation that really shows it is making adifference in our community.

One of the ideas was to cut volunteer passengers’ hair whilst the aircraft was flying and this was undertaken by two local hairstylists Sue van den Bergh and Henry Wakefield who had Veronica Hewett and Kayleigh Weiss seated in deck chairs for the exercise. 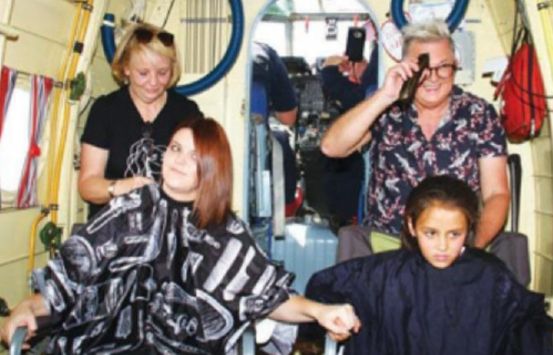 On Saturday 5 October, I had the privilege of having my hair cut in the air whilst flying in ‘Little Annie.’ I am 65 years old. This was definitely something I never experienced before. I was scared, but all the fears that flushed over me soon disappeared. I met the crew of the aircraft Little Annie, stylist Sue and Henry, the editor of African Pilot Athol Franz, a little girl called Kayleigh, who had her beautiful long hair cut off for cancer aware11ess and many more people I can’t remember. This was also an event to give a little something back to the community which is not as fortunate as I am. Thank you to everybody for this wonderful experience. The memories will stay with me for a very long time.

My daughter Kayleigh Weiss who is ten years of age attends Rietondale Primary School where she is a Grade 4 student. On Saturday 5th October, Kayleigh did not know anything about ‘the Hair in the Air function’ as it all came as one big surprise. I told her before the flight in Little Annie, that her hair would be cut during the flight and it will be the first time that anything like this has happened in the air. The first thing Kayleigh said was:”Mom, I would like to donate more of my hair for CANSA.” She was very happy to be able to donate her second ponytail within seven months.

Renier a very dear friend of our family had been fighting his cancer battle for a long time. He was a man who was very proud and a very neat person, especially when it came to his hair. Kayleigh once asked me: “Mommy, does the wind even blow Uncle Renier’s hair or does he ever have a bad hair day?” Renier started his chemotherapy and the next thing, he had lost all his hair. So from the most beautiful hair to absolutely nothing was a huge shock to Kayleigh and her siblings and she asked me, “Whatever happened to uncle Renier’s hair?” That is when I explained to my children what cancer is all about and that sometimes even babies and children get cancer and hair loss is what happens to them once they start with the chemotherapy treatment. Kayleigh was very shocked and touched by everything she was told. In January this year, Renier passed away and my children were devastated. The first thing Kayleigh said to me was: “Mon1my, now uncle Renier is in heaven will his hair grow back?”

A week after Renier’s death, Kayleigh came to me and asked me if I had heard of CANSA, where one can donate one’s hair and then wigs are made from the hair for cancer patients. I said to her that I had heard about it. Kayleigh then announced that she wished to donate her long hair. I agreed and we measured her hair. The length was 98cms. Kayleigh said 25cms of hai1· was required to make one wig so if the hairdresser cut off 30cms then there would be more than enough hair excluding split ends. On 8 March 2019 (CANSA Shavathon day), Kayleigh cut off 30cms from her hair. She wrote a short letter and placed it inside the bag with her ponytail and we took it to the CANSA offices where she donated her ponytail. That was
a wonderful experience for Kayleigh and she was so happy about her donation as well as the ‘thank you mail’ she received from CANSA for her donation.

The challenges of teaching my children the difference between right and wrong, to have morals and standards and always remember that there are people who are less fortunate than us, is something that stuck in Kayleigh’s head and I know I had done something right. She always puts other people’s needs and happiness before herself and always thinks of other people first and that makes me so proud to be her mommy. I also had long hair when I was younger and I remember how I felt about my hair. For a little girl, her hair is her pride and joy and every girl wants to be a Rapunzel. (Rapunzel is a German fairy tale about a young woman named Rapunzel who had very long hair and who lived alone in a tower, held captive by a witch). However, all my lovely Kayleigh could think about is that her hair is a potential wig for a person who does not have any hair! Words cannot begin to describe my pride.

When Kayleigh was asked by a neighbour about her very short hair, Kayleigh responded by saying: “It is only hair, it will grow back. Some adults and children are not so fortunate, and have lost all their hair. When my hair grows back, I will cut it off again for CANSA.”

My heart burst with pride once more!

Thank you to the ‘Little Annie’ team for inviting African Pilot to cover this event. Watch the YouTube Video: