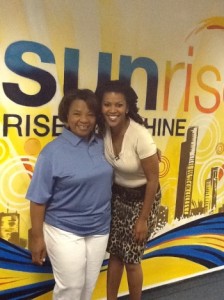 The Sunrise show at 6:15 am on e.tv, 29 February 2012, interviewed Johanna Francis – breast cancer survivor and Manager for our CANSA Lukholweni Care Home in Soweto. She shared her story of Hope and also talked about CANSA Shavathon.

My name is Johanna Francis.

I am 50 years old and married and have three children, a daughter and two sons and a grandson.  I was diagnosed with stage 1 breast cancer in 1999.  I had a radical modified left mastectomy.  I was in remission for three years then had a local recurrence in 2003.  I was on Tamoxifen (never had a dull moment with these drugs…)

Cancer recurred all over again and then I had my encounter with chemotherapy which lasted for six months with all its side effects which I could handle because in my mind I just convinced myself that this is like fighting nausea in pregnancy.  I also had radiation for 35 days, seven weeks to be exact so reconstruction was out.

I then became a volunteer and started telling my story in the TRUE LOVE,FAIR LADY and the SARIE magazines while I was still fighting emotions.  In 2001 during Breast Cancer Awareness month I appeared in the EDGARS CLUB magazine.  Thanks to CANSA for helping me not to feel sorry for myself.  Thanks to my faithful husband and adorable children who helped me to overcome all the highs and lows.  I was 37 years old when I was first diagnosed, I turned 50 in January 2012.  I am currently in remission.

I started working for CANSA in 2007 as Administrator at the Lenasia office which closed down last year.  In June 2008 I became Care Manager of LUKHOLWENI Care Home in Soweto.  LUKHOLWENI meaning Hope really gives cancer clients the opportunity to commence cancer treatment with no care of defaulting.  We provide accommodation, transport to and from the hospital as well as two meals per day. 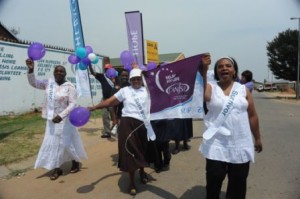 LUKHOLWENI was founded by the Presbyterian Church in Orlando East and was a Primary School back then.The church started this outreach program and CANSA took over in 1995, they did some renovations in 2003 and re-opened in 2004. My job is looking after our clients’ emotional, spiritual and physical needs.  We have a fulltime social worker and a registered nurse on duty every day.

We have an inhouse support group that enables clients to talk about their own challenges, their fears and also to share their highlights. 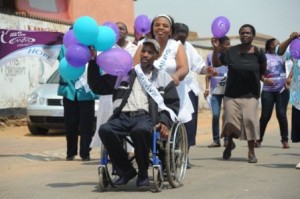 We face major electricity cuts during winter months and we need a generator – due to illegal connections in the area.

A brand new roof is also needed because fixing the old roof causes more problems.   The walls need painting and the bedroom doors need to be replaced.

Thank you for the opportunity to share my story and everyone’s support during Shavathon.