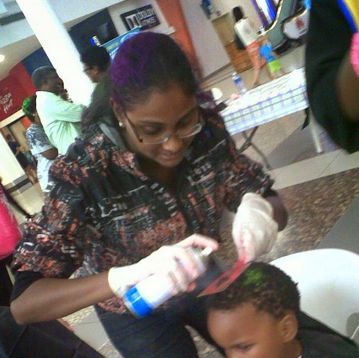 My First Shavathon as a Volunteer an Amazing Experience

Bronwyn Naidoo posts the following on the Musings of a Millenial Mom Blog – 3 March 2015:

This past weekend I had the honour of dedicating my Saturday to the CANSA Shavathon.

I was initially meant to help at the Hillcrest venue, but eventually ended up at the Gateway Theatre of Shopping.

By around 9 am we were finalising set-up and sorting our stations, and within half an hour we saw our first trickle of customers coming through the mall.

A volunteer was needed to run an errand of buying water, so I offered to do so. I went down to the Checkers Hyper and grabbed 6 packs of water and rushed back to our stand.

As volunteers we also had to spray our hair so that we looked the part and symbolised a united team.

I ended up with purple at the top of my head, and green at the back. Theses weren’t my colour choices but ironically they symbolised my daughter Danielle’s favourite character Barney, The Dinosaur *Awks*.

It had been raining hard since 6 am so it was understandable that the flow of people started off slow. Once we reached 10 am or so, people began arriving in droves. It was month-end so the mall was packed with shoppers, movie-goers and the like.

We were stationed at a prime spot, in front of the cinemas, and urged people to come through and colour their hair in support of CANSA and of course look funky.

At first I was scared to spray hair for fear of messing up, but eventually plucked up the courage to do so. As people came through I quickly realised that I much preferred doing little kid’s hair and also mastered the Star stencil which the little one’s liked a lot.

I cannot even begin to estimate just how many people I saw, let alone our entire team, but it was a lot!

I can honestly say that none of the volunteers or members of the CANSA team had a chance to sit down. Even when lunch arrived, we agreed to take turns to go and have a quick bite, so that there was always someone available to spray and shave hair.

One of the amazing things about the shaving section was that this year, there were more women shaving their heads than men. Lots of people that shaved their heads did it in memory of a family member or friend, while others were just keen to support the cause.

The representatives from CANSA which included Nadia Baderoon who I’d met through my Cuppa for CANSA last year, were simply amazing. They were every ready to assist the volunteers with whatever they were doing, as well as oversee the proceedings for the day.

Quite an amazing feat and so great to know that the other venues also raised amazing amounts.

The Shavathon was a great experience and definitely won’t be my last!

Hats off to the CANSA team and all the volunteers on a job well done. *Cancer Can Be Beat*